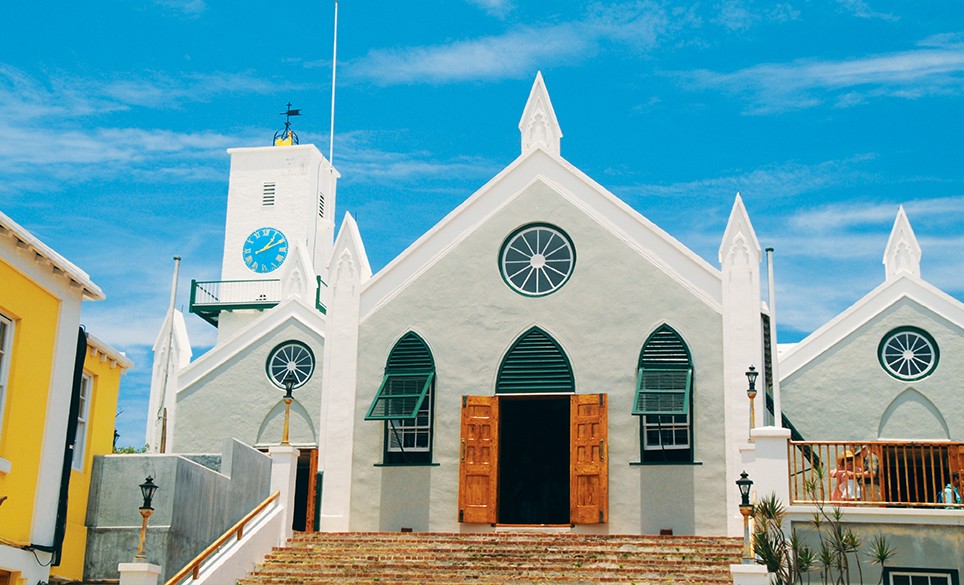 The island of Bermuda, named after Spanish explorer Juan de Bermudez, was discovered in 1505. Although being discovered, the Spanish did not colonize the island; instead it served only has a landmark for sailors navigating their journeys through the Atlantic.

Throughout the 17th century the English set up colonies in the New World. One voyage, led by Sir George Somers, was journeying to Jamestown Virginia. His ship, The Sea Venture, was set to lead nine ships sent to deliver important supplies and colonist. During the journey the ship became separated in storm before finding dry land on the island.

While on the island the colonist found that Bermuda was abundant in natural resources and was able to rebuild new ships to continue their journeys. After 10 months, the passengers were able to build two new ships, the Deliverance and Patience which continued their original journey to Jamestown. The successful news of the Sea Venture’s crew on the island was sent back to England, and led the Virginia Company’s Royal to explore potential options of colonization in Bermuda.

Three years following the Sea Venture shipwreck, the Virginia Company’s Royal Charter officially extended to include Bermuda, and sent an official group of English settlers to the island on 11th July 1612. The group was accompanied by leader Sir Richard Moore, who became the island’s first Governor.

Bermuda remained under the Virginia Company until November 1612, before being taken over by the Somers Isles Company. This new company, also known as the Bermuda Company, ran the colony until it was dissolved in 1684. In 1684 the island officially became a British Crown Colony under King Charles II, with appointed Governor Sir Richard Moore.

In present day, Bermuda is a flourishing democracy, taking form as a self-governing British Overseas Territory with a high degree of autonomy.

Over the years Bermuda underwent a series of physical and cultural changes, all contributing to the rich heritage that Bermudians experience today. One such major cultural development that has contributed significantly to the face of Bermuda is the migrations of various different ethnicities to the island over time.

Bermuda was highly affected by the influx of Black people during slavery. The first slaves were brought to Bermuda soon after the colony was established under Governor Daniel Tucker. In 1616, Governor Tucker sent a ship to the West Indies to find Black slaves to dive for pearls in Bermuda. This made the island the first English Colony to import Black people. Over the years more Blacks would populate the island in large numbers, originating from America and the Caribbean, working as either slaves or indentured servants. As Europe’s western expansion increased, thousands of West Africans were shipped to the Americas as slaves. Some of these slave ships are known to have become wrecked on Bermuda’s reefs, with the slaves being sold in Bermuda instead.

Slavery in Bermuda was abolished in 1834; two centuries after the first slaves arrived. However, the effects of this institution have had everlasting impacts on the cultural landscape of the island. Today a large majority of the population in Bermuda can trace its ancestry to the slaves that were brought there centuries ago.

Another group of immigrants that have contributed immensely to the future of Bermuda are the Portuguese. Bermuda’s connections with the Portuguese began over three centuries prior to their initial arrival. During the Age of Discovery, in the 15th and 16th centuries many Portuguese ships, like the Spanish, English and French, were shipwrecked in Bermuda. Bermuda was also a frequent stop for Portuguese seamen. However, it wasn’t until 1849 that the first Portuguese immigrants came to Bermuda seeking a better future away from the poverty of their homes in Madeira and the Azores.

Like those who came from the West Indies, the Portuguese celebrated their distinctive heritage, clutched tightly to their language, cuisine, social events and religious festivals and became an important part of the fusion of culture Bermuda is made of. By the turn of the century, many Portuguese had become naturalised Bermudians and went on to purchase land and invest in Bermuda on many other levels.

Information provided by the Department of Community  & Cultural Affairs

Bermuda placed on the map by Juan de Bermudez

Bermuda Settled by the English

Encountering a storm, the Sea Venture wrecked on Bermuda's surrounding reefs during it voyage from England to Virginia.

Slavery is abolished in Bermuda, and all British Colonies

The Bermuda Constitution Act 1968 is passed in the Bermuda Parliament

A parade which celebrate Bermuda’s Heritage through Gombey Troupes, dance groups, bands, majorettes, decorated floats Beginning of the Bermuda Day Celebrations starts with a Half-Marathon Derby at 9 AM; entailing a 13 mile course from Somerset to Hamilton

Becoming the first British Overseas Territory to do so